Now that France has opened up again for travel, skiers and snowboarders are looking at taking advantage of the end of season conditions and considering Easter in the mountains.

With the holiday season falling late in 2022 (Easter Sunday is April 17), many ski resorts are extending the season to ensure lifts and ski runs remain open. For many, they consider it the best time to experience the slopes.

“Many people don’t realise that it’s possible to ski right the way through into April, but actually snow depths on the higher slopes are often better than at Christmas and normally it’s possible to ski down to resort level too. The sun is higher in the sky and normally the temperatures are warmer – everyone enjoys sitting outside at lunch and at après ski time, for many it’s the best time to go skiing and we think this year will be no exception”.

Oxygene is also celebrating its 30th anniversary in 2022 and on the 30th of every month, free lessons and activities are being offered by every one of the 14 ski schools across the French Alps. These activities can be booked throughout the season, but here’s the detail of the free offers now available in March and April.

La Plagne and Belle Plagne: 4 hours guiding – discover the area with guided skiing and snowboarding
The Oxygene team is offering an afternoon guided session around La Plagne, from 1p.m. to 5p.m, with a professional guide.

Tignes: Kids snowboard taster
Designed for children from 3 to 5 years old, it’s an ideal way for young kids to learn how to snowboard, looked after by a professional Oxygene instructor.

Serre Chevalier: off-piste excursion
Aimed at confident skiers looking to explore terrain away from the marked runs. The Oxygène instructors will guide the way around the huge expanse of off-piste terrain in Serre Chevalier.

La Plagne and Belle Plagne: 4 hours guiding – discover the area with guided skiing and snowboarding
The Oxygene team is offering an afternoon guided session around La Plagne, from 1p.m. to 5p.m, with a professional guide.

Tignes: Ski touring with aperitif
Small group of 8 people on a sunset ski tour, with an aperitif and regional products. 5.30pm to 8pm for skiers confident on red runs.

Serre Chevalier: Ski touring
A full day ski touring session in a group of up to 6 skiers

In 1992 Oxygene ski & snowboard School was established in the French resort of La Plagne, extremely popular with British skiers and snowboarders. This was soon followed by the ski equipment hire shop, and then in 1997, the company expanded to Val d’Isère. In the year 2000, an adaptive ski programme was introduced and it is now an important part of the overall Oxygene offering. In 2016, Oxygene acquired the 3 Valleys ski school Magic in Motion and started to expand its destinations that today include 14 resorts in the French Alps. 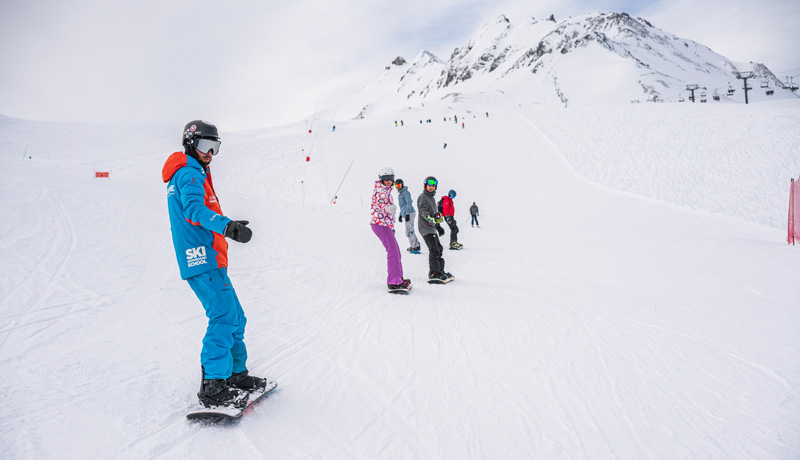