Henry’s Avalanche Talk, the organisation that helps skiers and snowboarders stay safe when venturing off-piste and touring, has launched a new Academy program as well as taking the well-attended tour online as a live virtual event.

HAT is endorsed by snow-safety brand ORTOVOX and the French Avalanche Association (ANENA).

Both talks and the HAT Academy program are suitable for all levels of off-piste skiers and ski tourers, from the initiation level, to experts.

The new Academy, where participants can choose between a weekday or weekend version, is a series of In-Depth modules that run either over two Saturday’s in November (7th and 21st), or on every Thursday evening from October 29th to December 17th), with eight separate live and interactive sessions that last for around one hour. The programs will be limited to small groups of people with discussions taking place following any presentations by Henry Schniewind, founder of HAT.

Topics covered in the academy include The Essentials, How Avalanches are Triggered, The Human Factor, Managing a Rescue and creating and using a checklist. It’s geared towards both experienced off-piste skiers and those who want to start exploring the terrain beyond the marked ski runs.

“The HAT Academy will give me the chance to get to know people and to provide them with practical help and guidance. With fewer people and more time, we can explore everyone’s questions. I know every participant will walk away with better knowledge and be better equipped to stay safe in the off piste and make better decisions. Our Safety is Freedom framework and checklist is a unique way to assess and manage risk. The HAT Academy is the best way to experience it”.

For anyone that wants to take part in both The Essentials and In-Depth talks that always take place during the autumn throughout the UK, they can still participate online during two, one-hour sessions spread across different dates. The talks are a ‘must-do’ for anyone thinking of heading off-piste in the mountains, whether with or without a qualified guide.

The Avalanche Transceiver Training program, where participants learn and practice the skills to help find buried avalanche victims quickly, are going ahead as usual with events in Wimbledon Common, Poole (Sandbanks) and Manchester (Sale Water Park). HAT is following the government guidelines for outdoor events and group sizes will be kept to a maximum of 6 people (one session – 2 groups of 6 people max), socially distanced.

“We’re going to discuss the latest lessons from recent research on the Human Factor and how it applies to decision making and risk taking in the backcountry and off-piste skiing. Why it is that when there are clear clues indicating danger, people who ‘should know better’ (have the basic training needed in order to recognise these clues), still get caught out in avalanches”?

The Essentials Talk Dates, Times And Price
The Essentials talks are held over two week nights or two consecutive Sunday’s in two parts, each sessions lasts one hour. There are four scheduled talk events taking place.

The In-Depth Talk Dates, Times And Price
The In-Depth talks are held over two week nights or two consecutive Sunday’s in two parts, each sessions lasts one hour. There are three scheduled talk events taking place.

How HAT Has Helped To Save Lives Over The Years

Henry’s Avalanche Talk has helped to prevent potential deaths caused by avalanches during its time as a leading organisation on snow safety.
Henry Schniewind explains:

“The problem that we search to solve at HAT is that more than 90% of all accident victims trigger the avalanche themselves. Accidents are avoidable for the most part. We are applying tried and tested decision making, risk and crisis management techniques that originate from aviation, military, healthcare and finance to name a few”.

Quotes From Industry Professionals In Relation To Saving Lives And HAT

“Henry Schniewind has worked in collaboration with ANENA for many years. His avalanche awareness and training has prevented over 100 avalanche deaths over the last few decades according to recent estimates”.

“As a former F-16 pilot and United Airlines pilot, I strongly believe in Henry’s suggested use of a framework / checklist approach for all off-piste skiers and tourers. His type of disciplined approach has saved numerous lives in the world of aviation, healthcare and other endeavours that can be safe if simple decision making and risk reduction measures are applied – but unsafe if they are not”.

“Henry has done fantastic accident prevention work for many years”!

Henry’s Avalanche Talk (HAT) provides training and essential information for skiers who want to go off-piste, but are held back by fear of the unknown. HAT is known for helping ordinary skiers have an extraordinary experience off-piste.

Henry’s Avalanche Talk has been helping to educate off-piste skiers and snowboarders for over 30 years and has grown into a team of off-piste professionals, often referred to as HAT. Talks and courses have been delivered to tens of thousands of people, presented at international snow science conferences and published many papers and articles, often in the British press.

Training is available in the UK, Val d’Isère and online. 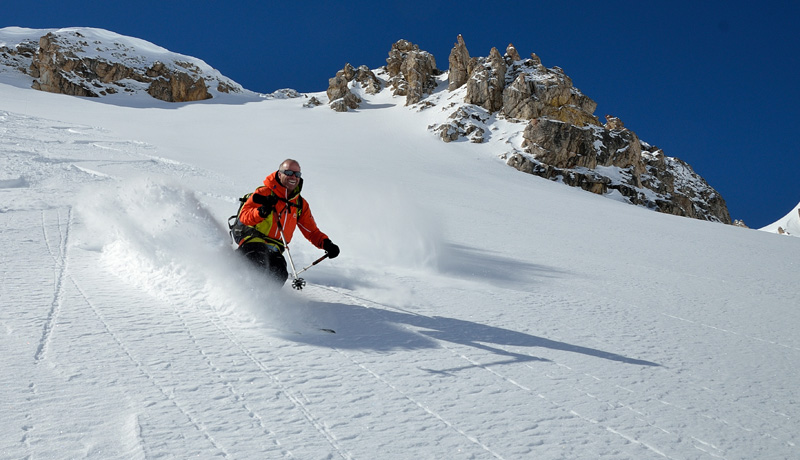