Dan Egan and Eric Wilbur’s latest book Thirty Years in a White Haze tells Egan’s story of worldwide adventure and the evolution of extreme skiing. It’s available in the UK from March (with pre-ordering now open).

Thirty Years in a White Haze is a story of worldwide adventure and the evolution of Extreme Skiing, chronicling Dan’s trials, successes, and losses, as well as the technological boom and subsequent growth of the outdoor media industry.

‘Thirty Years in a White Haze is more than a ski story. Yes, at the centre are our snow adventures, but more importantly, this is an attempt to show the historical connections and generational ties through my family and the evolution of the sport. When I survived my expedition on Mount Elbrus in 1990, it was the beginning of my adult life as I know it today. I was twenty-six years old. For the next thirty years, I’ve had to learn to restructure the patterns caused by that traumatic experience. That trip has touched every aspect of my life: relationships; the ending of my marriage in 2001; post-divorce relationships; business and financial decisions, especially when I’ve felt threatened; and where and why I ski the locations I do today. Thirty Years in a White Haze is my story of how skiing almost killed me and saved me, all at the same time. I hope you enjoy it.’

Sheltered in a snow cave on Mount Elbrus, Dan Egan stares into the mouth of a storm on the tallest mountain on the European continent, a merciless mountain which claims more lives per year than Everest. In the belly of the beast, Egan takes stock of every moment that brought him here—the life of a Boston boy enthralled with self-determination and adventure.

Egan emerges from the white haze of the storm to summit a climactic arc of perseverance we see repeated across decades on skis, on sailboats, in personal relationships, in entrepreneurial endeavours, and in examination of self. The world-renowned pioneer of extreme skiing takes the story of his youth growing up in New England and artfully creates the stage for the simultaneous evolution of big mountain skiing and his personal journey on snow and sea.

Listen to interviews with Dan Egan the on ActionPacked Travel podcast and also The Ski Podcast.

Quotes About Thirty Years in a White Haze

“What a great book. Wish I’d written it! I also wish I could claim to have skied many extreme descents in Dan Egan’s wake but it will never happen now! I even struggled skiing massive moguls with him in Smugglers’ Notch, Vermont. He was very patient, but I just couldn’t keep up! (To be fair, moguls are not my forte, particularly huge icy ones!) Apart from joining him skiing (gingerly) down the occasional couloir, the most enjoyable skiing I ever had with Dan was with my wife Vivianne on one of his couples clinics in Okemo, designed to stop the stronger skier in any couple dominating the day’s skiing and scaring his or her weaker partner with too many challenges. My wife and I had a ball – literally – even dancing down the slopes arm-in-arm together in one of Dan’s exercises. Dan has always been a kind and modest guy – both as a skier and a person – maybe partly as a result of a particularly frightening adventure on Mount Elbrus, when he was buried perilously in the snow. Luckily I wasn’t with him!”

“Dazzling! A fascinating read by one of the world’s gutsiest adventurers… It’s hard to tell what Dan Egan is better at—exploring the world’s most fascinating and dangerous places or putting into words what his adventures mean to him and to the rest of us.”

“Dan Egan has been a huge inspiration to me and the academy ever since meeting him at the ski show in London decades ago. He has helped to push my business forward in so many ways, as well as helping me with group management and having confidence in my product. He has a special gift of sharing his knowledge and the love of skiing with others – I would just like to say a big thank you from me and the whole academy team for what he’s done not just for us, but also for the whole skiing industry. For anyone that would like to be inspired by Dan, just start by reading his book, you won’t regret it.”

“I first met Dan Egan back in the ‘80’s when he came to Verbier and then worked with him on his TV Show Wild World of Winter when he came back in 2008. Dan was part of the freeskiing revolution that had some of its routes right here in the Swiss Alps, when myself along with John Falkiner and Ace Kvale started ‘Team Clambin’, a kind of revolutionary lifestyle that broke away from conventional skiing and helped kick start the extreme movement, now known as freeride or freeskiing. Like Team Clambin, Dan has always carved out his own career path and followed his passion. This book, part bio and part history of the freeride movement, will I’m sure bring back a ton of memories for me and hopefully inspire a new generation of kids to follow their dreams.”

Jason Levinthal, Entrepreneur and Founder of Line and J skis

“As a kid, I looked up to Dan Egan the pro skier, a pioneer of mind-blowing extreme skiing. As an adult, I looked up to Dan, the entrepreneur, turning his skiing passion into businesses. However, it wasn’t until I read this book that I realized how crazy Dan’s adventures actually were!…If you
ever dreamed of becoming a lifelong ski bum, this is your chance to make it happen without leaving your couch…These stories are told as if passed around the bar at the end of a ski day, backed by Dan’s infectious sense of humor and first-hand perspective.”

“As a downhill ski racer, I have put myself in danger time and time again. The rush of adrenaline is what pushes you to your very best, but of course that is always balanced out with precision and control in Alpine skiing. For someone like Dan, he’s pushing himself to the very limits too, often outside his own comfort zone – then add to that the unpredictable nature of the mountain environment outside of controlled terrain and it makes for a heady mix of danger, fear and excitement. Dan brings this all to life in his book and whatever kind of skier you might be, whatever level you are, it’s possible to relate to some of that, crazy that it sometimes feels. Dan has on occasion interviewed me, but I have not yet had the chance to ski with him….after reading this book I want to change that, it would be a rush.”

“Anyone who watched Warren Miller films back in the day, myself included, has heard of the legendary Egan brothers. I first got to know Dan about twenty years ago, at ski shows up and down Britain. Dan was an ambassador for New Hampshire, I was promoting Vail Resorts, and we were often working on neighbouring stands. Dan clearly loves skiing, and is the most friendly and sociable person imaginable – two qualities which make him a great teacher and communicator, and which clearly emerge in this entertaining study of the world of skiing.”

“Dan and I go back to the early 1980’s. When we both ‘retired’ from ski racing at a national level in Vermont, we joined our hometown high school teams, met at weekly competitions and raced fiercely against each other on the small, sometimes man-made, hills around Boston, Massachusetts. Dan learned to ski on the icy East Coast, USA conditions that demand a high level of technical skill. I see him every year when he comes for a month or two to run his Adventure Ski Clinics in Val d’Isère, France where I have been living for most of the last 30 years. We’ve worked a lot together and I’ve learned a lot from him too. One of the things I admire is Dan’s ability to help others discover the mountain for themselves, he loves to share his own knowledge, technique and passion for the sport. When you read this book and discover the kinds of things he’s been through, the life full of skiing he has led – not to mention his career as a journalist and broadcaster, then you might just get a sense of who he is. But if you get the chance to ski with him on one of his clinics then go for it, you’ll have a friend for life”.

Thirty Years in a White Haze Website
Order on Amazon 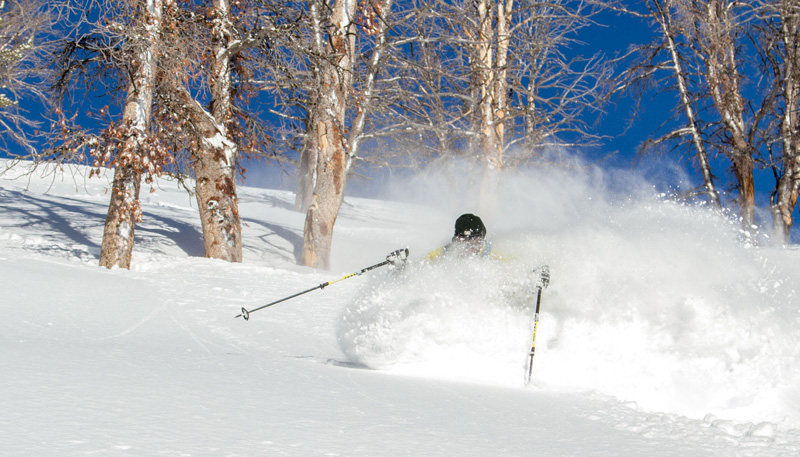