The four times Winter Olympian, 7 times World Championship skier and 7 times overall British champion skier has endorsed Alto.Ski and understands the benefits of having a ‘pay-as-you-go’ lift pass that saves money, time and hassle, so skiers and snowboarders can get on the mountain faster.

The company has also launched its service with a new wooden lift pass that skiers can keep time and time again. This seriously reduces plastic waste and means you just need one pass for every ski trip.

The Alto.Ski app also delivers a whole host of other benefits through its strong partnerships including ski and snowboard rental through Europe’s number one network, Skiset. Convenient ski insurance is also just one button away.

“I’m so excited to come on board with Alto.Ski, I feel it’s the future of lift passes. When the world is moving at such a crazy pace and we are working so hard, we have seen a rise of the spontaneous traveller. That spontaneous traveller wants to find a destination to go skiing at, be there and on the slopes. They don’t want to faff around with lift queues and logistics. It will be like the Oyster card in London. Imagine if a few destinations in London had said no to the Oyster card, I can guarantee no one would go there. The Oyster card makes travelling in London ridiculously easy, you hop on you hop off and you’re there, that is what we are trying to provide for the mountains. I think Alto.Ski is an incredible innovation, it’s going to make life easier, so we can spend more time on the slopes and less time on the computer”.

Joining Alto.Ski is easy, simply download the Alto.Ski app and order an Alto.Ski card by providing payment details. The Alto.Ski card will be sent in the post, QR code scanned by the user and it’s ready to use. Once registered, skiers and snowboarders can use all the functions available.

The pay-as-you-go system provides skiers and snowboarders a flexible ski pass solution that means they only pay for what they use and they will always get the best price for the time they spend on the slopes.

Modern and convenient
With Alto.Ski, there’s no queuing at ticket desks when arriving at the resort. The card is activated during the registration process and connected to the app – skiers can start using the lifts immediately. The card is compatible with the electronic ticket gates that all ski resorts use.

Hassle-free insurance
Skiers can subscribe to daily ski insurance by clicking a single button on Alto.Ski + premium page. The insurance will be activated only after the skier passes through the first gate of the day and will be valid for 24h. Countries such as Italy now legally require insurance for all skiers and snowboarders and it’s possible to purchase a policy right up to the last minute, before hitting the slopes.

Alto.Ski is a UK-based technology company that offers skiers and snowboarders a variety of services through its app.

Alto.Ski’s is a pay-as-you-go ski pass - connected to a phone app - that allows skiers and snowboarders to go straight to the ski slopes without having to queue at the ticket office or pay in advance.

It’s a more flexible kind of skiing where payment is made for the time spent on the slopes, whether that's for a half day, full day or multi day ticket.

Instead of having to pay for lift tickets before hitting the slopes, there’s an automatic bill at the end of each day's skiing, at the best available rate in that ski resort.

Plus, as well as ski tickets, there’s a flexible daily ski insurance package - available through the Alto.Ski+ premium subscription or purchased on a daily basis via the App.

Alto.Ski doesn’t charge the user any more for a ski pass and can help them save money. Alto.Ski works with ski resorts across the Alps and is looking to expand its portfolio during the 2022-23 winter season.

Enjoy The Snow Fuss-Free: Alto.Ski Leads The Way In New Technology For Skiers And Snowboarders 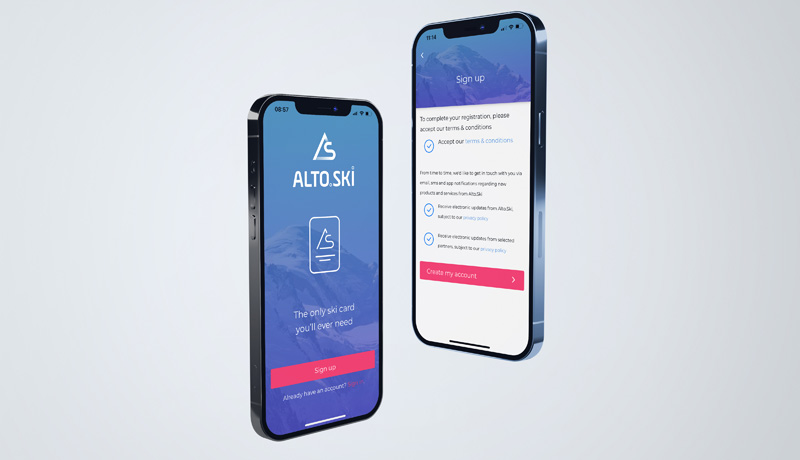