Swiss resort of Crans-Montana is hosting three Alpine World Cup women’s ski races starting on Friday February 21 with the re-scheduled replacement downhill for Rosa Khutor (cancelled due to heavy snowfall) meaning back to back days of women’s downhill races in the resort.

On Saturday February 22, the top women’s downhill skiers will compete in the Crans-Montana downhill on the Mont-Lachaux piste, often regarded as the toughest course on the women’s circuit.

Sunday February 23 will see the Alpine Combined competition, a mixture of Super G and slalom races, testing both the skills required for high-speed skiing with the technical discipline of the tight gates on the steep slalom course.

Saturday 22 February
– Great atmosphere at the finish area and in the sponsor village at Barzettes from 08.30
– World Cup Downhill from 10.30
– Entertainment at Ycoor from 16.00 with prize giving and bib draws from 19.00
– The Oesch die Dritten concert at Le Régent from 21.00

Sunday 23 February
– Great atmosphere at the finish area and in the sponsor village at Barzettes from 08.30
– World Cup Alpine combined with a Super G from 10.30 and a Slalom from 13.30

Crans-Montana is a chic and stylish all-year-round mountain resort located in the Valais canton of Switzerland (French speaking), around two hours by train from Geneva Airport.

The resort is part of the Best of the Alps group (bestofthealps.com).

Two towns, Crans and Montana, merge together to form the resort and both have their own identities. Sitting on a high plateau above the Rhone Valley and facing south, the views are spectacular, especially from higher altitudes where it’s possible to see Mont Blanc in the west, through to the Matterhorn and way beyond to the east. During the winter, the skiing is well suited for intermediates, with a wide range of blue and red runs, but there’s excellent beginners areas as well as some more challenging slopes for experts, including some interesting off-piste and ski touring terrain. During summer, the resort is a haven for both road cyclists and mountain bikers as well as hikers and adventure seekers. Accommodation is varied, with a strong luxury element including several 5* hotels and a spread of 3* and 4* options as well as self-catering apartments and B&B’s. 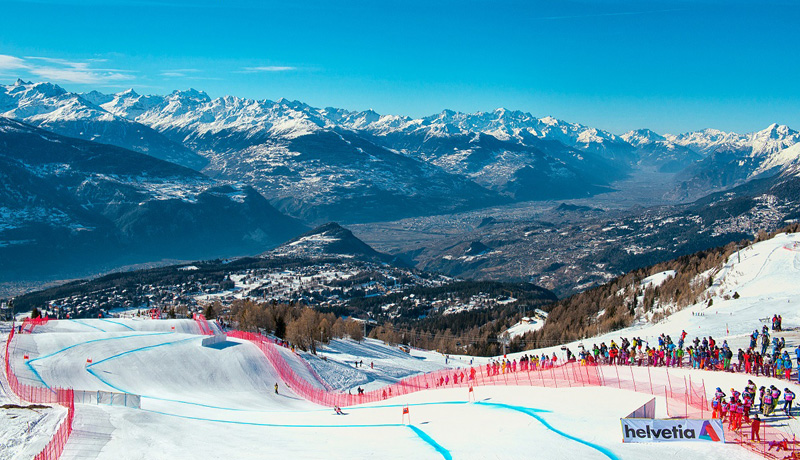