The new comedy festival in Les Gets promises to deliver funny shows in both French and English, mixing and matching both languages within each event.

Let’s Get Comédie takes place over 4 days with shows that include improvisation, stand up, mime and musical comedy. Venues include the Salle de La Colombier in the resort centre and also The Marmotte Hotel and are split into après ski, evening sessions. Doors and a fully serviced bar will open from 8pm with shows starting at 9pm. Other shows and will add to the festival vibe from après-ski right through to the wee small hours in local bars, restaurants and hotels.

Accommodation and festival pass ticket packages are available through the official partner, Chalets 1066.

LATE AND LIVE STAND UP

The ski resort of Les Gets is located about 1.5 hours’ drive from Geneva Airport in the northern French Alps.

It’s linked with 12 other resorts in the Portes Du Soleil region that total 293 ski runs and 189 lifts. Les Gets-Morzine ski area has 68 ski runs and 42 ski lifts alone, with a lift capacity of over 70,000 / hour. There’s 3 Boardercross runs and a snowpark as well as a free beginners ski area with several lifts. 77 km of trails are available for cross country skiers.

In town, there’s a number of hotels ranging from 4* to 2* as well as numerous chalets and apartments. There’s a total of 40 restaurants, on and off the mountain. 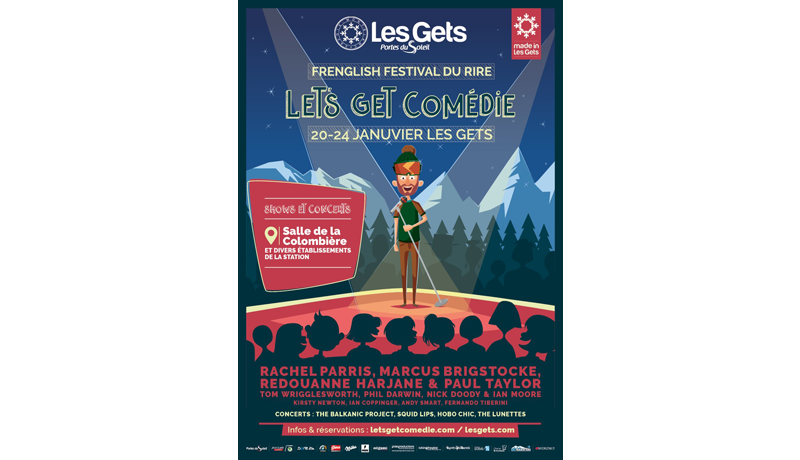