The Swiss ski resort of Crans-Montana has been named as the host of the 2027 FIS Alpine World Ski Championships following the FIS council elections and award ceremony in Milan on Wednesday May 25, 2022.

The resort previously hosted the biennial competition in 1987.

Held over two weeks in February, it will see the very best men and women Alpine ski racers compete across disciplines including Downhill, Slalom, Super G and Giant Slalom.

Held in Milan, the International Ski Federation (FIS) ceremony was hosted by former British ski racer and Eurosport commentator, Nick Fellows and he was joined by FIS president Johan Eliasch.

Announcements were also made for 2026 and 2027 World Championship events in Freestyle ski and Snowboard, Ski Flying and Nordic.

“We had four excellent bids to host the 2027 Alpine World Championships and it certainly was not an easy decision. Crans-Montana brought a passion to its bid that you could feel. Bringing the Alpine World Ski Championships to the heart of Alpine Skiing in 2027 will be an unbelievable opportunity.”

Crans-Montana won 11 of the 18 votes against Narvik (Norway), Soldeu (Andorra) and Garmisch-Partenkirchen (Germany).

Urs Lehmann, president of Swiss-Ski and vice-president of the Candidature Committee, said:

“Obtaining the 2027 World Championships is the reward for the excellent work of the whole team over the last few years. If our project was the most convincing, it is because everyone, from the Commune to the Canton, pulled together. We also benefited from a large support from the ski lift company and the community.”

The expected 200,000 visitors to the event will enjoy a new state-of-the-art, multifunctional finish stadium and have been promised ‘breath-taking Swiss performances on the snow’.

Crans-Montana is a chic and stylish all-year-round mountain resort located in the Valais canton of Switzerland (French speaking), around two hours by train from Geneva Airport.

The resort is part of the Best of the Alps group (bestofthealps.com).

Sitting on a high plateau above the Rhone Valley and facing south, the views from Crans-Montana are spectacular, especially from higher altitudes where it’s possible to see Mont Blanc in the west, through to the Matterhorn and way beyond to the east. During the winter, the skiing is well suited for intermediates, with a wide range of blue and red runs, but there’s excellent beginners areas as well as some more challenging slopes for experts, including some interesting off-piste and ski touring terrain. During summer, the resort is a haven for both road cyclists and mountain bikers as well as hikers and adventure seekers. Accommodation is varied, with a strong luxury element including several 5* hotels and a spread of 3* and 4* options as well as self-catering apartments and B&B’s. 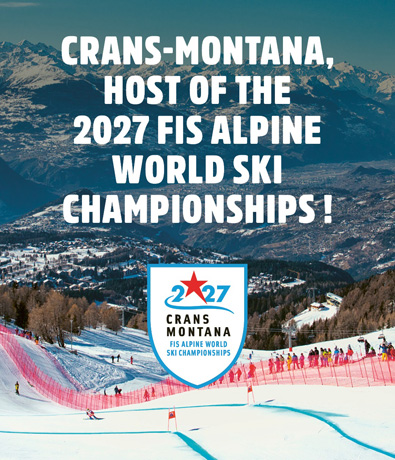